Congress - The Art of Incumbency - Part I - The Sounding Line

Submitted by Taps Coogan to The Sounding Line on the 25th of September 2016.

In just a couple short weeks, millions of Americans will be participating in the greatest of American traditions: the democratic election of a new president. While the institution of voting is a thing to be cherished, election campaigns themselves certainly are not. Nothing reveals the duplicity and corruption of Washington quite like a presidential election. This election is nothing short of Machiavellian.

After suffering through the endless hyperbole, flip-flopping, and scandal, perhaps the silver lining of presidential elections is the fact that, no matter who wins, they cannot serve for more than eight years.

Interestingly, the President is nearly the only person in Washington subject to term limits. Neither the executive bureaucracy that surrounds the President, nor members of Congress are limited by anything except their ability to curry favor and get re-elected or re-appointed.

Certainly, it is not the objective of this article to debate the merits of the presidential candidates. Quite the contrary: despite being disliked at historically unprecedented levels (see here), both Donald Trump and Hillary Clinton are beloved compared to Congress (which is also on the ballot on November 8th). Congress’s approval rating has been declining steadily and now hovers somewhere around 18%. That is as close to universal condemnation as you are likely to see in any US national poll on any subject.

Perhaps most principle on the list of grievances against Congress is the sentiment that they simply don’t get anything done. Any bill, no matter how routine, is hijacked by an increasingly insular, partisan, and corrupt political class. Bills are so full of divergent add-ons, riders, and pet projects that they become so long that it is often physically impossible for any single person to read them before the vote is held. If one could read them, it would be impossible to reconcile the opposing elements of the bill to permit anything resembling a principled vote. It has often been said that it is the fate of republics to devolve into oligarchies as power is consolidated by a few corrupt families who hold it for too long.

This begs the following question whose answer may explain the increasingly insular, partisan, and unproductive nature of Congress. Are members of Congress trending to serving longer terms?

Having accounted for the careers of over 13,000 Congress men and women, over a period of 227 years, we are able to chart the average years served, or ‘tenure’, of the House of Representatives and the Senate every year from 1789 until today.

As you might suspect, and as the charts below testify, there has been an unmistakable trend towards Representatives and Senators serving more and more terms. Until the start of the 20th century, the average years served in the House was typically less than four years, equivalent to about two terms. After that, the average tenure started to rise dramatically, hitting a high of 12 years or six terms in 2008. The Senate follows a similar trend going from four to five years (a single term is six years) for the first 100 plus years of American history to a high of about 15 years (nearly three terms) in 2008.

While the average tenure has declined slightly since 2008, there is no indication that the long trend towards Congress members serving more and more terms is going anywhere.  The current batch of Congress men and women are nearly the most ‘incumbent’ of all time. 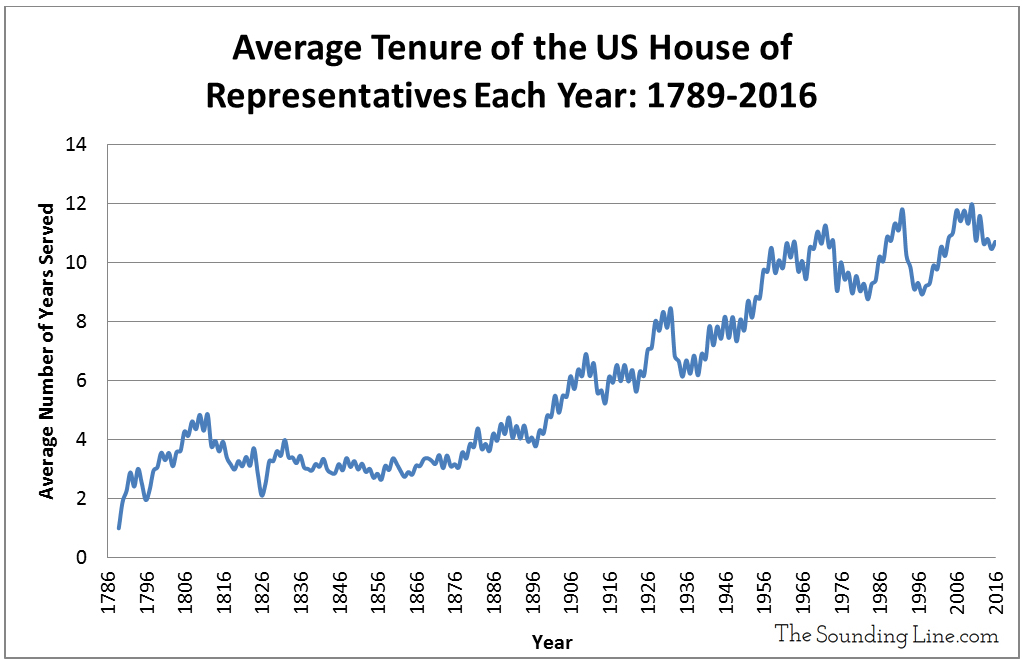 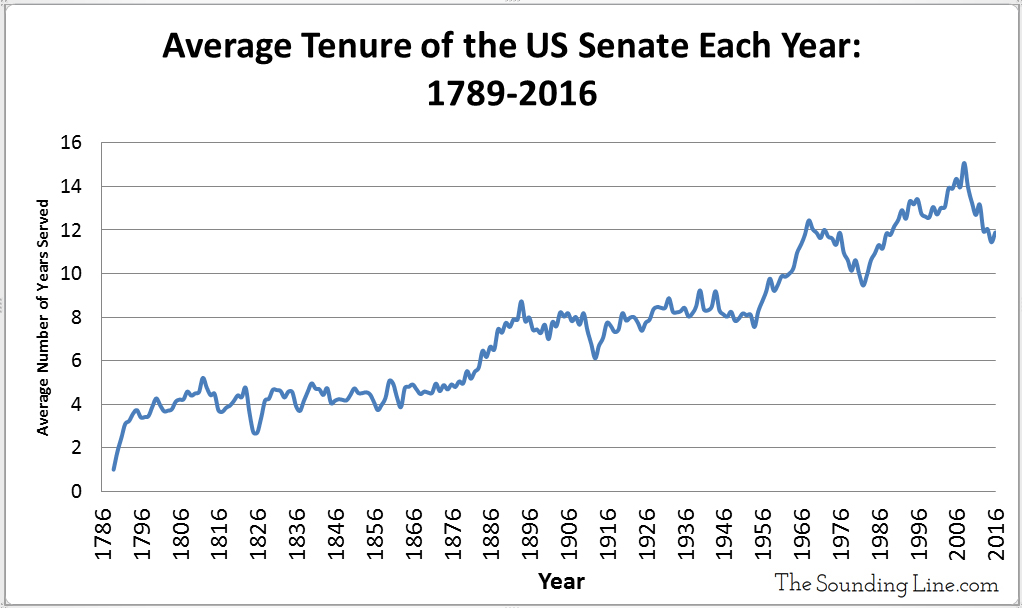 This trend is particularly concerning when one realizes that despite dismal and still decreasing approval ratings, members of Congress are serving longer and longer terms. With voters so disapproving of congress, shouldn’t they be being voting incumbent politicians out in favor of new faces and new ideas?

The simple truth is that the corruption of the political system has allowed the monopolization of congressional power and co-opting of established media by fewer and fewer well connected families and individuals. The results speak for themselves.

I did the exact same chart regarding the Senate, though my chart for the Senate looks a little bit different at the most recent dates. 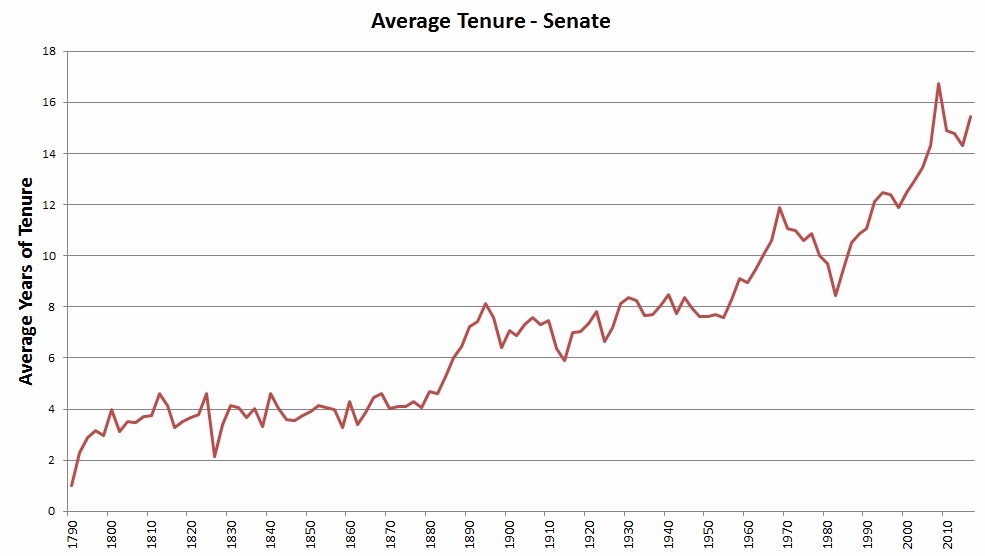 I see you did the House too. THANKS.

That is a lot of data there.

Ken,
Thanks for sharing the chart. I can see that the charts seem to match up well until the last few years, as you said. Not sure what would be causing this. Would be interested to know where you sourced your data.
Thanks.