Submitted by Taps Coogan on the 13th of October 2018 to The Sounding Line.

The following ‘map’ shows every country in Europe, caricatured from the perspective of Germany, one year into the First World War (1915). 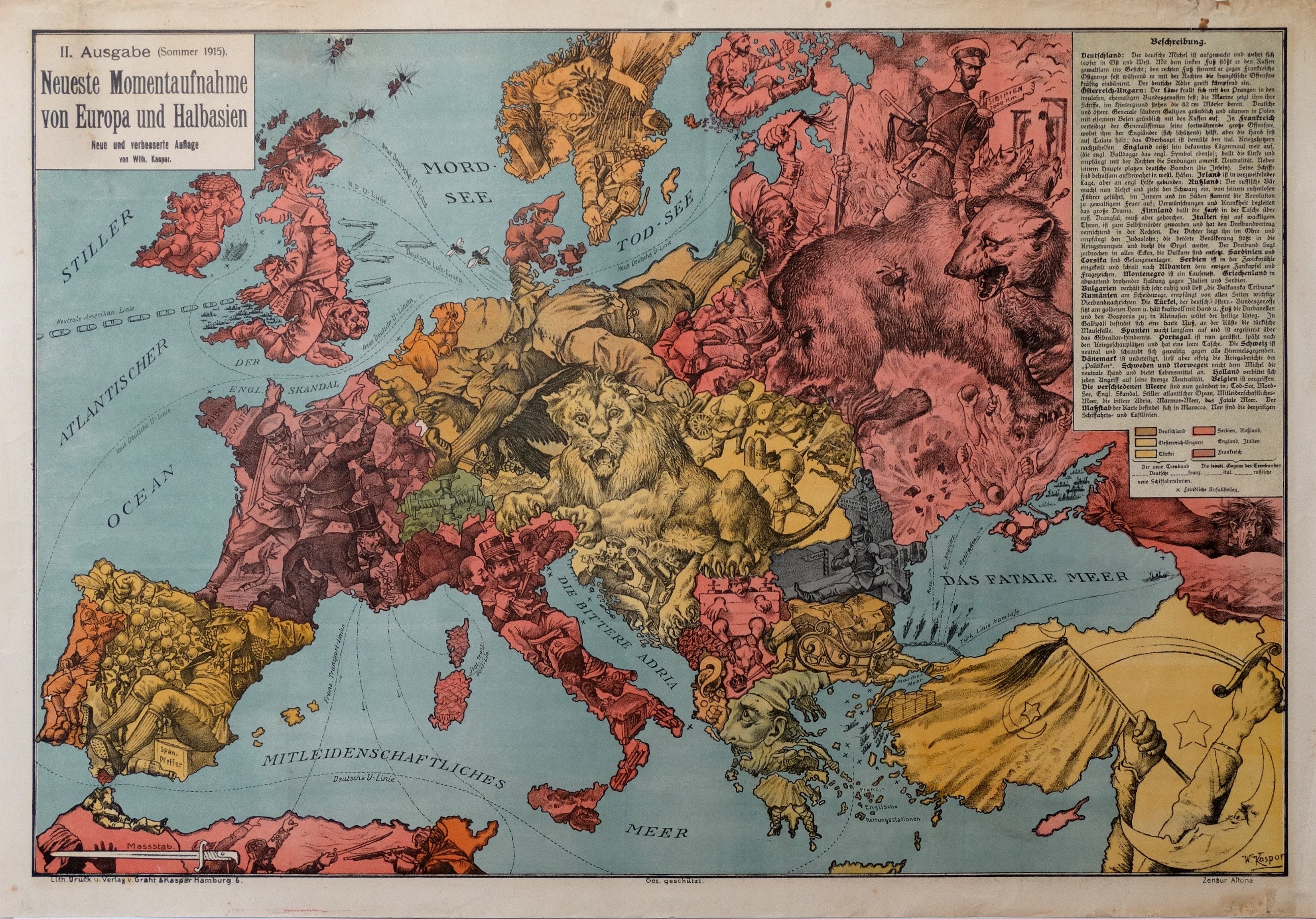 A translation of the text in the upper right (via Reddit user invasiveorgan) reads:

Germany: German Michael has awakened and is defending himself bravely in East and West.With his left foot he is violently kicking the Russian in the face; his right foot he braces against France’s eastern border, while he powerfully contains the French offensive with his right [hand]. The German Eagle intervenes fighting.

Austria-Hungary: The lion claws into the faithless former ally with his paws; The Navy is showing him its ships, in the background 32 cm mortars stand ready. German and Austrian Generals are cleaning Gallicia thoroughly, and are sweeping the Russians out of Poland with an iron broom.

In France the Generalissimus is defending his ongoing great offensive, while the Englishman (protecting himself) assists, but reaches for Calais; the head of state is trying to help the Italian warmongers.

England is opening its known liar’s mouth wide (The English bulldog, England’s symbol, does likewise); [he]balls his right hand into a fist, and receives the Message of American neutrality with his right. Next to his head German bombs are exploding (the islands). His ships are carefully stored in western ports.

Ireland is in a desperate state, but bound to English aid.

Russia: The Russian Bear is turning back and tucking his tail, led by his inglorious Master. In the interior and the south the fire of revolution is flaring up mightily; Curses and disease accompany the great drama.

Finland is making a fist in its pocket over Russian oppression, but must obey.

Italy is sitting on a wobbly throne, has become suicidal, and holds the triple alliance destroyingly in its right hand. The poet belabors his ear and receives the Judas price; the beguiled population blows into the trumpet of war and keeps grinding the organ. The triple alliance lies broken in all corners, the volcanoes are horrified.

Sardinia and Corsica are POW camps.

Serbia is in a real pickle and is glancing towards Albania, the perpetual source of discord and the eternal question mark.

Montenegro is a nest of lice.

Greece [is] in a waiting, threatening position against Italy and Serbia.

Bulgaria is acting very calmly and reading the “Balkanska Tribuna”.

Romania, at a cross-roads, is receiving important quadruple alliance news from all sides.

Turkey, the German-Austrian ally, sits at5 the Golden Horn and holds Bosporus and Dardanelles closed powerfully with hand and foot; in Asia Minor the holy war is raging. In Gallipoli there is a tough nut, at the coast the Turkish mouse trap.

Spain is slowly awakening and is wroth over the Gibraltar obstacle.

Portugal is now armed and ready, peeks towards the theaters of war and has empty pockets.

Switzerland is neutral and cranks its braces powerfully towards all cardinal directions.

Denmark is not involved, but eagerly reads the war-reports of the “Politken”.

Sweden and Norway is extending a neutral hand to Michael [Germany] and offering food stuffs.

Holland is dismissive of any attack on its strict neutrality.

Belgium is out of stock [no longer available].

To see the changing front lines of the First World War, read here.