Taps Coogan: Central Banks Should Prepare for Recessions, Not Delay Them - The Sounding Line

Submitted by Taps Coogan on the 21st of December 2018 to The Sounding Line.

Central banks have devolved from trying to make sure that the economy can weather recessions, to doing anything that they can to postpone them. Instead of addressing the root of the financial bubbles that caused the last recession, central banks have spent most of the past decade deliberately reflating the bubbles to extraordinary new highs.

We need to break this cycle of easy money policies aimed at delaying recessions. Such policies permit and incentivize financial bubbles to build up far too large. In doing so, they make the next recession, which is always looming on the horizon, ever more dangerous. As the next recession grows ever more dangerous, fear of it grows, and the desire to doing anything to delay it grows.

The US has endured 42 recessions and five depressions in its history with the average business cycle lasting barely five years. Most recessions have been short healthy events that purged the economy of bad businesses and debt, and kept everyone disciplined. In the twelve years from 1970 to 1982, when America’s economic growth was at its all time peak and real wages for average Americans were higher than they are now, there were no fewer than four recessions. 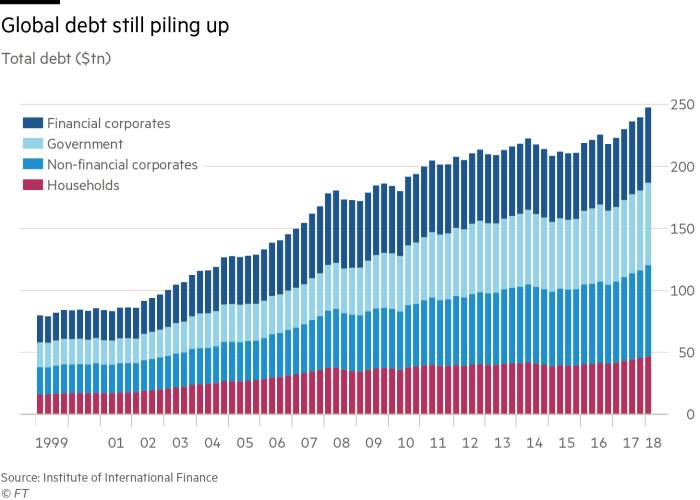 Breaking out of this recession ‘doom-loop’ will not be easy. The problem with tightening in the current economic expansion is that it is a financial market led expansion. We know that the global economy did not recovery from the last recession due to structural pro-growth reforms because, globally, there were virtually none until very recently. Effective tax rates, regulatory burdens, and fiscal deficits are larger in almost every major economy than they were ten years ago. The global economy recovered from the last recession because of years of massive gains in financial markets and massive increases in debt which were a direct result of central banks printing trillions of dollars and holding interest rates at historic lows for a decade.

While recent changes in US tax and regulatory policy are a step in the right direction, there has been nowhere near enough structural reform, particularity in Europe, to transition the global economy from a financial market led expansion to a fundamentals led expansion. While the Fed’s belated desire to normalize policy is commendable, aggressively tightening monetary policy when financial markets are on pace for their worst year since 2008, and when recession indicators are starting to flash red, risks triggering the massive recession central banks have brewed for us over the past ten years. It would kneecap the pro-growth reform initiative in the US, undermine the Fed’s ability to continue to tighten, and kill any hope of transitioning to an economic fundamentals driven economy.

The Fed’s recent failed attempt at a ‘dovish hike,’ that has sent the market tumbling, raises the question of whether there is any tolerance left in financial markets for the continued tightening necessary to normalize monetary policy. We should all hope that there is, and that the recent selloff is an over-reaction. Otherwise, we are headed into the next recession with bigger problems and fewer tools than the last time, and the doom-loop continues.

Superb piece, simply the best I’ve read on the topic from any source.

Thank you very much!