Taps Coogan: The Bloom Is off the Rose in China - The Sounding Line

Submitted by Taps Coogan on the 15th of October 2018 to The Sounding Line.

For close to 30 years, we’ve been told that China is going to overtake the US and the ‘West’ and become the largest and most powerful economy on Earth. Supposedly, the best the West can hope for is to ‘manage’ China’s rise and hope it liberalizes on the way to the top.

It is clear why that sentiment continues to be so prevalent. China has been the fastest growing large economy in the world for decades. Since 2000, China’s economy has grown over 325%. That compares to 33% in the US and just 1% in Italy. Since 2008, China has been responsible for a stunning 54% of all global GDP growth (pdf). China has become the second largest economy in the world, roughly two-thirds the size of the US, the world’s largest manufacturer, the largest consumer of industrial resources, and the largest exporter. For decades, China has outgrown the US and the West in virtually every economic metric one can think of.

In truth, the secret to China’s economic success is simple. It is built on the largest and fastest growing debt bubble in modern history. Today, the ratio of Chinese banking system assets to GDP (a measure of financial system debt) is higher than it was in the EU on the eve of the 2011 European Sovereign Debt Crisis and nearly six times that in the US before the 2008 Housing Crisis. 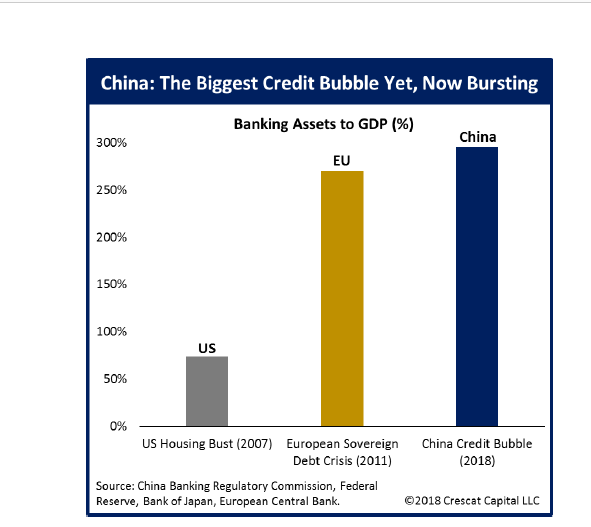 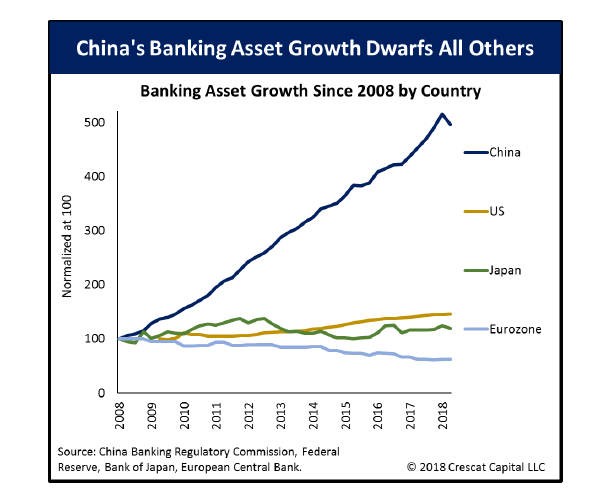 Looking specifically at corporate and household sector debt, China is reaching levels last seen in Spain before their financial crisis in 2011 or in Japan at the peak of their economic growth in the 1990s. 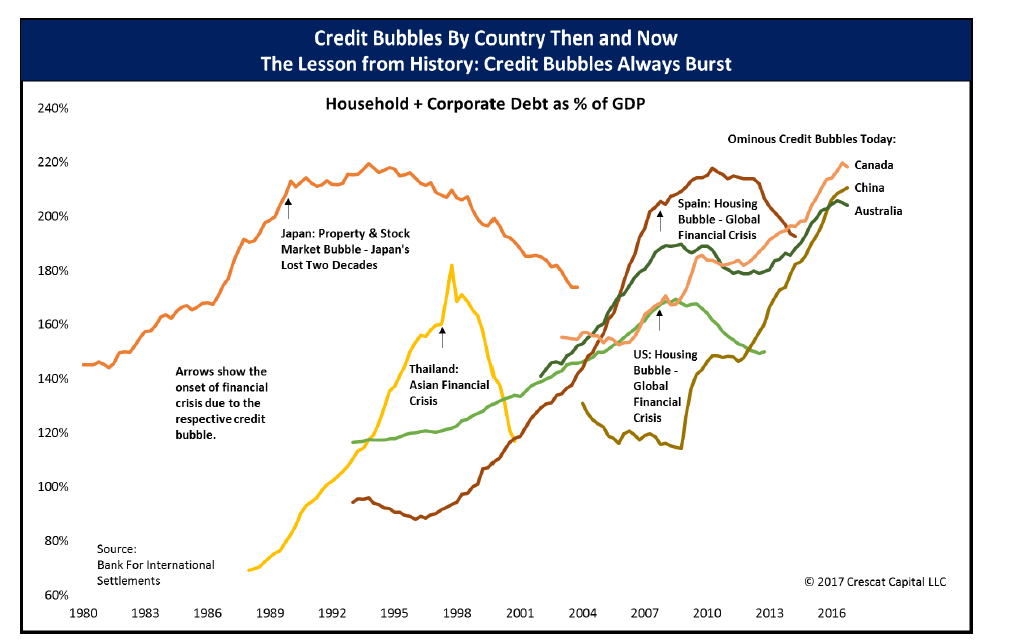 What’s more, as we first explained here on The Sounding Line, the Chinese government likely ran a bigger deficit than the US last year when local government debt is included in the calculation. The whole world critiques the US government (quite justifiably) for its unsustainable spending, yet we hear very little about China’s similarly large government spending problem.

Considering that most of these figures exclude China’s massive $10 trillion shadow banking system, notoriously lax accounting rules, and penchant for completely making up economic statics to create the illusion of growth, China is likely in the midst of the largest debt bubble in modern history.

Much of China’s debt has gone into massive infrastructure projects throughout the country. Accordingly, China is now spending nearly 90% of GDP to build infrastructure despite persistent overcapacity problems and numerous ghost cities that still remain essentially empty years after they were built. Perhaps the most remarkable thing about China’s economy is that it is ‘only’ growing at an official rate of 6.7% despite such massive over construction and exaggerated economic numbers.

‘China Bulls’ often counter these points by noting that the bulk of China’s debts are owed internally and denominated in Chinese Yuan, making an implosion of their debt bubble much less likely. If only that were true… While domestic debt bubbles can last longer, they eventually pop. Examples abound, including the US Saving and Loans crisis in the 1990s, the US Housing Crisis of 2008, and Japan’s lost decades.

The domestic nature of China’s debt bubble combined with the Chinese government’s virtually unlimited power to regulate and contort its economy has delayed the implosion of its credit bubble longer than would be possible in most countries. It is hardly an accomplishment to celebrate, though it has made predicting China’s meltdown the modern day equivalent of ‘China Syndrome.’

Meanwhile, the mirage of ‘Capitalism with Chinese Characteristics’ as a viable alternative to free markets persists. The implication being that somehow good accounting practices, representative government, the free flow information, and free markets are any more an inherently ‘Western’ way of running an economy than the lack of those things is an inherently Chinese way of running an economy. Countries around world have adopted such principles because, in the long run, they are fundamentally good ideas that work better than the alternatives. The entire arch of human history stands as evidence to that fact. Yet China is increasingly turning towards an authoritarian command economy: growing the role of state controlled firms, restricting the flow of vital economic information, directing a massive credit bubble to build obvious overcapacity as part of state mandated economic objectives, and adopting an unelected ‘president’ for life. These are not evidence of ‘Capitalism with Chinese Characteristics.’ They are expedient central planning the likes of which the world has watched fail countless times.

It is time to stop confusing China’s genius with its expediency.

People are naive if they do not recognize the distinct advantage a state-driven economy has over free enterprise, at least initially. A bit predatory in nature, such a system can quickly exploit the weaknesses of its competitors. It is important we recognize China is a state-run economy based on a business model that is geared to expand by crushing the competition. Subsidizing those companies working within its system in a multitude of ways helps it achieve this goal. Countries that export goods at slightly below cost in exchange for manufacturing jobs are not stupid they are predatory and we in… Read more »

You are obviously ignorant of the incredible inefficiencies and waste brought on by corrupt statist planners.

China’s debt bubble is not going to implode. China is a Communist country. They control all aspects of the banking and monetary system, and can keep a bubble going forever if they have to. Ultimately, they can monetize as much debt as they have to, and use capital controls to prevent the currency from imploding. China will be fine, but the measures it takes to prevent debt implosion may make China even more competitive with the USA in terms of trade, since they will be able to sell goods for even lower prices. They might even mobilize for war, and… Read more »

It’s possible, but China is the most trade dependant country in the world and the second largest importer. Without exports to the US, China runs a smaller trade surplus than Ireland.