Submitted by Taps Coogan on the 7th of September 2018 to The Sounding Line.

Having reached the end of the chaotic Senate confirmation hearing of Supreme Court nominee Brett Kavanaugh, it is as good a time as ever to reflect on changes to the average tenure of the US Supreme Court. Much like we have done for members of the House of Representatives and the Senate, we have compiled a database of every Supreme Court Justice in the history of the United States. Accordingly, the following chart shows the average tenure of the court every year since 1789 (the average number of years sitting justices have served on the Supreme Court in any given year). The data is current up until and including the nomination of Justice Neil Gorsuch. 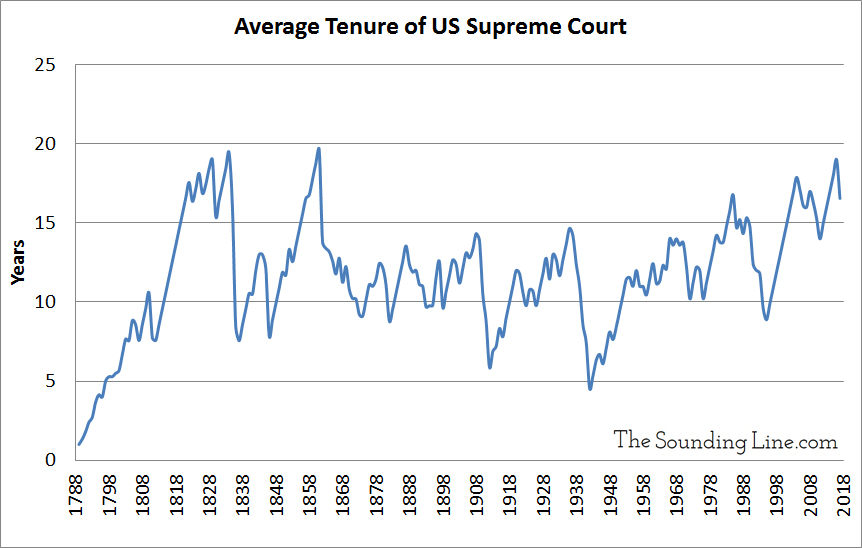 The all-time record tenure was set in 1861, when the sitting members of the Supreme Court had served an average of 19.6 years. When long serving anti-slavery Justice John McLean passed away that year, the average tenure fell and remained depressed for the next hundred years. 1861 also marked the start of the American Civil War and, incidentally, Justice McLean was succeeded by Justice Noah Haynes Swayne, the first Republican Supreme Court Justice in history. The average tenure of the Supreme Court has been marching higher since the 1940s and reached its highest level since 1861 before the nomination of Justice Gorsuch in 2017. The increasing average American lifespan likely has a great deal to do with that trend.

There is no particularly compelling reason to argue that a longer or shorter overall tenure is advantageous for the Supreme Court, but it is interesting to consider that the court is essentially the longest serving it has been since the outbreak of the Civil War.