US Working Age Population Is Plummeting - The Sounding Line

If you were to make a list of factors that point to a deflationary outcome for the economy, the following chart would have to rank very highly on that list:

We started covering this story last December when the numbers for 2019 showed that growth had turned negative for the first time on record. Now, the US working age population is shrinking at nearly 1% year-over-year.

The decline in the US working age population is somewhat of a surprise. UN estimates have long forecast modest growth in the US working age population until at least year 2100. However, fertility rates have undershot expectations for decades, fatality rates have climbed higher due to the opioid and obesity epidemics (and more recently Covid), whereas immigration rates moderated from 2017 through 2020.

While people can debate whether or not working age population contraction is good or bad for the environment and society at large, it’s a catastrophe for the economy, particularly for an overindebted and over-financialized economy with large unfunded liabilities owed to retirees.

Since Japan’s working age population peaked in the late 1990s, it has had 20 years of zero interest rates, it has added over 200% of government debt-to-GDP, its economy has not grown at all, its stock market crashed and then plateaued, and its demographic decline has accelerated.

Real economic growth comes down to 1) the % population increase and 2) th % productivity gains. I’ll make an assumption that population in the US is now declining — like China, Germany, etc., now the US?? Productivity is not rising very much at all since the government can’t end our emergency or crisis level economic support of QE, near zero interest rates. This is because there IS NO growth. In fact, only growth in debt is fueling any “growth.” https://gulfcoastcommentary.blogspot.com/2016/09/were-reaching-end-of-road.html 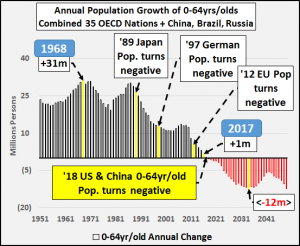 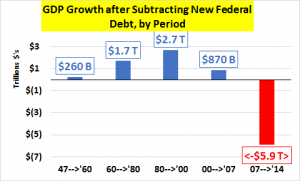