Submitted by Taps Coogan on the 9th of March 2017 to The Sounding Line.

It is no secret that the US Federal Government has a spending problem. As we discussed in detail here, the federal debt has increased every single year since 1957 (including the Clinton presidency). Perched near $20 trillion, the US Federal debt is now larger than the entire US economy for the first time since WWII.

Only the current period of extraordinarily low interest rates has enabled the US to service its oversized debts without cutting into other program expenses or raising taxes further (here). While it is too early to know for certain, interest rates are threatening to move higher and the Fed is finally, slowly, tightening monetary policy.

The era of extremely low interest rates is bound to come to an end eventually. When it does, the costs of servicing existing and new debt will increase geometrically. There will be no choice but to tackle runaway spending and the one class of spending that now exceeds all others is entitlements.

As the charts below show, entitlement spending (health care, income assistance and social security) is approaching $2.5 trillion dollars per year, equaling over $7400.00 per US resident, compared to about $1800 for national defense. Entitlement spending has increased from 9% of government revenues in 1952 to a whopping 73% in 2016! This represents a paradigm shift in government from one that existed to provide defense and essential services to one that overwhelmingly exists to transfer wealth between individuals. 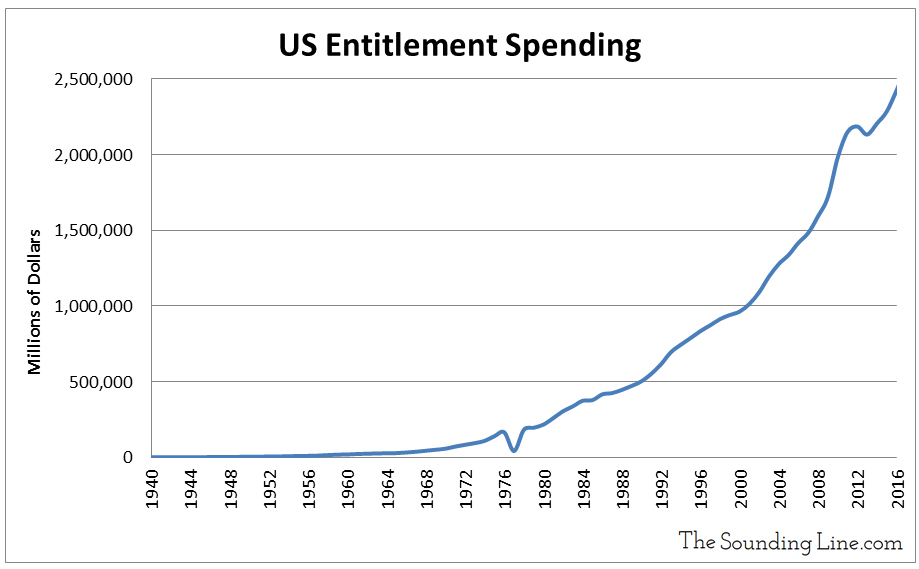 With the retirement of the baby boomer generation at hand, a perfect storm is brewing. Labor participation is shrinking (here) including amongst the youth (here), the population over 65 is surging (here), interest rates are set to rise, and the debt levels are the highest in generations.

With unfunded liabilities upwards of $100 trillion, Uncle Sam has made more promises than he can keep and for Americans relying on those promises, bad news is in store.