Submitted by Taps Coogan on the 27th of July, 2017 to The Sounding Line.

Chris Hamilton, of the excellent economics website Econimica, recently published a must read post titled ‘Why The Treasury Market – And Everything Else – Is No Longer a Free Market.’ Among several salient points, the article reveals the large changes that have occurred in the US Treasury market since the financial crisis. With regards to who has historically bought US Treasuries, the article notes:

“776–>2007:  What should be clear is that the primary buyer (certainly since 1970 through 2007) was the Intragovernmental surplus taking down nearly half of all US debt while simultaneously reducing the need for greater debt issuance.  This reduced the marketable debt issuance by half that Foreigners and the domestic public essentially split.  The Fed only held a relatively small portion of short term debt.

2008–>2014:  The Treasury issued nearly as much debt from ’08 through ’14 as it did over the previous 231 years, but the sources of buying radically changed.  It was foreigners who purchased nearly half of all US Treasuries, the Fed and domestic public nearly a quarter each as IG buying plummeted due to declining revenues from SS (Social Security).

2015–>2017:  Since QE ended in October of 2014, the Fed has ceased outright buying and foreigners have been net sellers, leaving the buying to the domestic public with a small and declining assist from the IG fund. 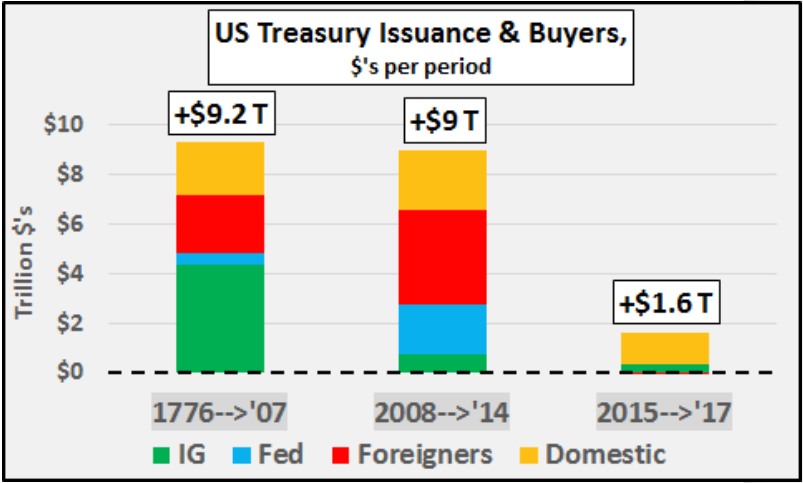 And below, what this looks like on a % basis. 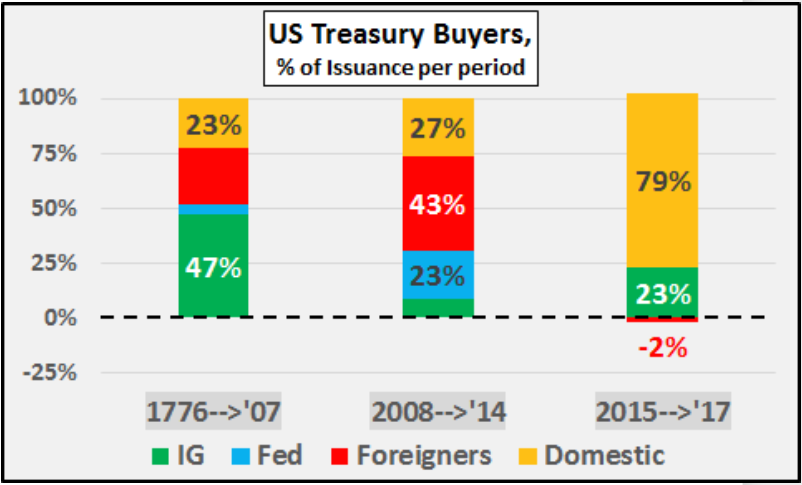 Since QE ended, here is a snapshot of who those domestic buyers are.  According to the Treasury, it’s mostly “Other” with an assist from mutual funds?!?  So “other” and some mutual funds are America’s sole creditors who in the absence of all other buyers suddenly find Treasury bonds (still yielding near record lows) irresistible.  And yet, the change in their buying is felt nowhere else as equity and real estate markets race to record valuations??? 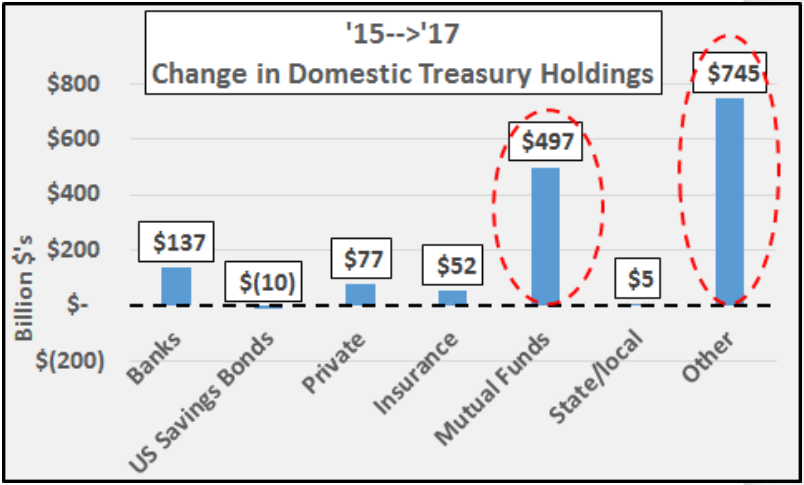 All excellent points. The mysterious “Other” bar raises the all-important question of who exactly has been the largest accumulator of US Treasuries since the Fed ended QE3. In other words, who is the largest financier of the US national debt? The size and ambiguity of this “Other” buyer, and the fact that the increased purchases of Treasuries by domestic buyers hasn’t led to sell-offs in other asset classes, leads to Chris Hamilton’s apparent suspicion that free market dynamics have been subverted.

Fortunately, we may be able to provide an ID to the “Other” buyer by turning to a different Fed database, the Financial Account of the United States, which details quarterly changes in US Treasury holdings by the various elements in the economy. While the categories and totals don’t exactly match the above charts, they are close enough to venture a good hypothesis. Analyzing this data we have created the following chart which details approximately $1.7 trillion dollars of net US treasury acquisitions since the third quarter of 2014, when QE3 officially ended; an amount roughly equal to the total issuance of Treasuries during that period.

From this chart, it appears that the mysterious “Other” buyer in the Econimica article is a combination of households (which includes non-profit organizations) and smaller contributions from government retirement funds, brokers, and dealers, ETFs, etc… The large move by households into Treasuries likely reflects increased demand for treasuries as short term rates have risen and increasingly conservative asset allocations in light of bubblish equity valuations.

While the mystery of who is buying treasuries may be solved, the underlying point remains: the only major buyers of the US national debt since 2014 are domestic, a dramatic change compared to previous years. There will be a limit to how much debt households can absorb and, eventually, further purchases of US Treasuries will have to come at the expense of allocations to other financial asset classes such as stocks or corporate bonds.

However, as we discussed most recently in ‘The Excess Reserve Overhang – More Important than Ever,’ banks are holding over $2 trillion dollars in excess reserves. Much of that money would normally be invested in Treasuries. If the Fed is serious about normalizing policy, much of that money will likely leave the Fed and the highest probability is that much of it will be used to purchase US Treasury securities. That could potentially buy the US Treasury market much needed time before the very real problem of who will continue to finance the US Federal Debt comes to bear and rates are forced higher.

As for the health of free markets, for yours truly, it is neither in the ownership structure of Treasuries nor in the capricious levitation of asset prices that the damaged state of free markets is revealed. It is in reconciling the enormous complexity of markets with the enormous power given to a small collection of bureaucrats at central banks that one can see the diminished role free markets play in our present economic thinking. There is no consensus among the world’s best traders and analysts, is it not peculiar that there is among central bankers?