Map of the Day: All the World's Air Traffic Visualized - The Sounding Line

Submitted by Taps Coogan on the 10th of April 2018 to The Sounding Line.

The following interactive map, from the Metrocosm, shows the flow of airline traffic to and from every major airport and country in the world. As Metrocosm’s Max Galka notes:

“This globe displays one year of global air passenger traffic. The data comes from modeled estimates compiled for the Vector-borne Disease Airport Importation Risk project (available for download at WorldPop). In 2010, the year for which the data was modeled, there were roughly 30 million commercial flights around the world carrying about 2.8 billion passengers.”

“In the graphic, the air passenger flows are visualized as 1.4 million particles — each one representing 2,000 passengers. Airports are shown as purple spheres, with their size denoting total passenger traffic over the year.”

“The busiest routes are not in the U.S. or Europe as you might expect. In fact, no U.S. flight route, those departing from or arriving at any U.S. airport, even cracks the top 100. Denver International to Hartsfield-Jackson Atlanta International, America’s most trafficked route, ranks only #101 worldwide.”

Clicking on a specific country reveals that country’s airline traffic. 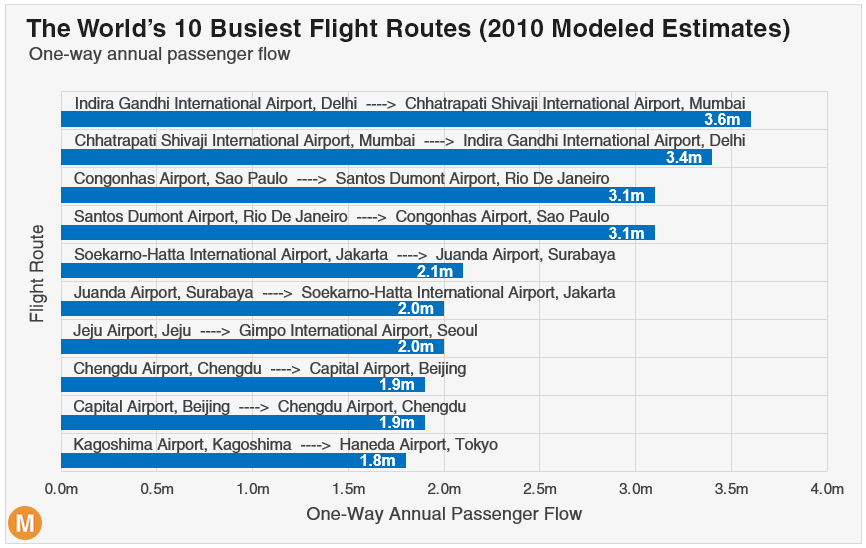 It should not come as a surprise that the top ten busiest routes are dominated by fast growing emerging economies with increasingly wealthy populations. Keep in mind that some of the trends are likely to have changed since the data set was compiled (2010).