Submitted by Taps Coogan on the 20th of February 2016 to The Sounding Line.

Nearly eight years after the financial crisis and despite one of the longest, largest stock markets bull runs in history, artificially low interest rates are still dominating the global economy.

For many countries, interest rates are still being manipulated lower. Since 2014, 19 Eurozone countries, Japan, Sweden, Switzerland, and Denmark have issued sovereign debt at negative interest rates. According to Bloomberg, $7 trillion of bonds have been offered with negative yields, accounting for 29% of Bloomberg’s developed sovereign bonds index as of the 6th of February 2016.

Central banks around the world have purposefully manipulated interest rates lower since the 2008 financial crisis in an attempt to create and sustain an economic recovery. Behind this effort is a singular belief called the ‘wealth effect.’ This idea has directly led to the most radical central bank policy in modern times, the lowest interest rates in human history, and arguably the printing of more currency than in all previous human history combined.

The ‘wealth effect’ has supplanted the very foundation of free markets and capitalism. Articulated by Adam Smith in 1759, the most foundational truth of capitalism is that the ‘invisible hand’ of free markets will do a better job balancing supply and demand and pricing risk than bureaucrats.

What is the ‘wealth effect?’

The ‘wealth effect’ is the idea that if central banks artificially lower interest rates, people who have their money saved at banks or in low risk bonds will react to the new lower interest rates by moving that money into potentially higher risk/reward assets. Examples would include stocks, real-estate, or higher risk bonds. The cumulative effect of many people doing this will drive up the prices of these assets. If the value of these assets goes up, people will make money that they will spend in the ‘real’ economy. Voila, self-sustaining economic growth has been realized.

In this post we will discuss conceptual issues with the ‘wealth effect’ by attempting to answer the following question:

Since the Fed began lowering interest rates and executing quantitative easing (QE) starting in 2008, they have succeeded in driving the stock market and bond valuations to record highs. According to the ‘wealth effect’ this should have translated to great improvements in the ‘real’ economy. The truth is quite different. Despite record highs in stocks and high risk bonds, proportionality fewer people are working, wages haven’t grown meaningfully, a record wealth gap has emerged, commodity prices are declining, U.S. imports and exports are declining, and GDP growth has stagnated. It hard to argue based on those facts that higher stock prices lead to an improvement in the ‘real’ economy. This simply has not happened.

In order to concentrate money in an asset class, stocks for example, that money most come from somewhere else, or be printed. The gains and profits made by money accumulating in stocks will be offset by losses resulting from money leaving other asset classes or sectors of the economy. Similarly, if the Fed prints money to inflate one, or several asset classes, the increase in the quantity of money is offset by a commensurate decrease in the value of money, i.e. inflation.

The extra wealth created by people crowding into stocks as a result of low interest rates, will be no greater than the profits lost on interest income on savings at the bank or in bonds bonds, or value lost to the effects of inflation, or investment in real factories and equipment forgone to pursue corporate stock buybacks.

To put some numbers to these assertions, consider this. 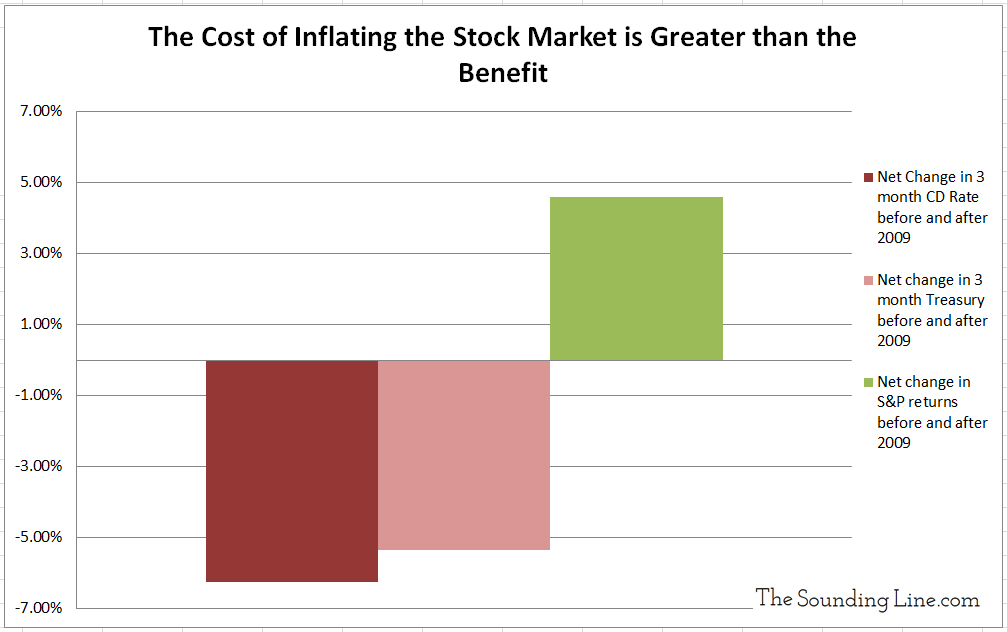 People that live pay check to pay check, who cannot afford to invest in stocks, by definition are spending more of their income than people who are saving and investing in stocks and bonds. Providing 4.6% increased annual earning potential to fewer, wealthier, higher risk stock investors by taking away 6.25% earning potential away from far more people who spend a far greater percentage of their income decreases total spending and consumption. There is simply no ‘wealth effect.’

Furthermore, the assertion that money held in stocks or high risk bonds is more productive than money held at the bank does not hold water. Banks use deposits to finance entrepreneurs, startups, and small and medium sized businesses. These are by far the largest employers in the country and the engines of innovation and growth. Companies that are listed on U.S. stock markets are generally larger, established businesses which have increasingly used their resources on stock buy-backs instead of capital investment.

At this point the astute reader may contend that lowering interest rates allows that banks to loan more money and thus there is an economic benefit to low interest rates that we have failed to capture thus far. This is not necessarily true.

The amount that banks can loan out is a function of the amount of deposits they have, demand for loans, the cost of lending, and their ability to find people who are sufficiently credit worthy. As the two charts below show, historically banks were highly efficient in loaning out the maximum possible amount permissible based on their reserves. However, since 2008 and low interest rates, the banks have continued to build reserves at the same historical pace thanks to the Fed, yet they are loaning proportionally less money. At the end of the day the bank’s need to find credit worthy borrowers with sound plans to to generate the returns needed to repay loans. In our weak economy, it is not the cost of lending that constrains credit growth, it is the ability to find worthy recipients and project to lend too.

At its heart, the so called ‘wealth effect’ is nothing more than taking $5 from your left pocket, putting it in your right pocket, and proclaiming that you are $5 richer.

The ‘wealth effect’ has succeeded in making the wealthy wealthier by depriving the majority of people of vitally needed earning potential that they would have actually spent in the real economy. The ‘wealth effect’ has artificially driven wealth into higher risk assets and has, by design, inflated those asset values.

What does the Fed think will happen to the wealth in higher risk assets if the higher risk finally materializes? How does the Fed expect to ever normalize its policy if high stock valuations are primarily a result of the Fed’s abnormal policy? What happens when all of the money that is willing to move into high risk assets has done so; how will those assets continue to rise?

The answer to these questions is simple. Interest rate policy has not normalized because it cannot normalize without incurring loses in risk assets. Stock prices rose because of lower interest rates and, without structural reforms, they would fall because of high interest rates. This is the definition of a bubble. It is hard to fault the Fed for wanting to stimulate a fundamentally weak economy but the ‘wealth effect’ doesn’t work and doesn’t hold up to serious scrutiny. Little is more concerning than the fact that it forms the foundation of central bank theory around the world.

How can lending and credit growth be restored? Long overdue and badly needed structural reforms to regulatory, tax, fiscal, and trade policies. What ails the US economy is not a lack of central bank interventions but a increasingly byzantine regulatory framework.