Submitted by Taps Coogan on the 19th of October 2017 to The Sounding Line.

“The Politician’s promises of yesterday are the taxes of today.”- Mackenzie King

If you live in New York City, you are on the hook for an estimated $441,000 in debt and unfunded promises made by the various layers of government that ‘represent’ you (local, state, and federal). If you have a child, your government has borrowed or promised the same amount on their behalf as well. 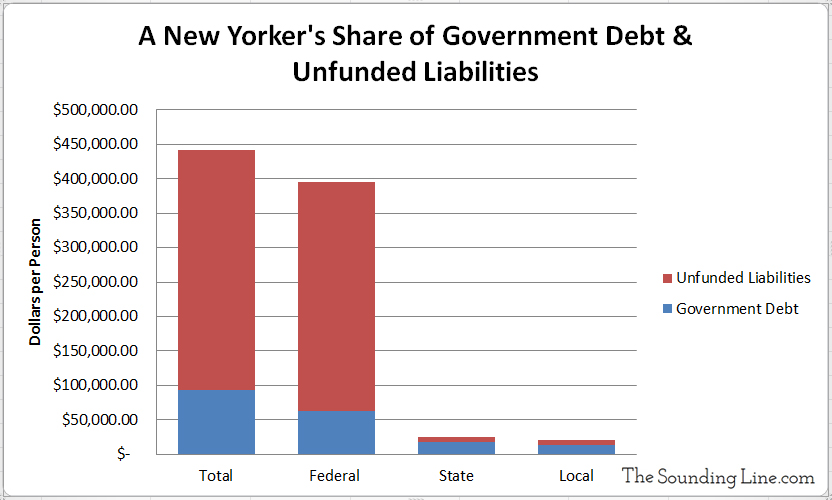 How did we get here?

Add it all up and factor in population and you will discover that the average New Yorker is on the hook for nearly half a million dollars in government debt and promises that have been made on their behalf and that will eventually have to be extracted from them on top of the taxes that they already pay.

The good news is that the tab isn’t due all at once. The average maturity of the US federal debt is just under six years and the unfunded liabilities are estimates that typically span the next 75 years.

The bad news is that governments at all levels continue to borrow ever larger amounts of money and unfunded liabilities estimates are almost certainly under-estimating the problem, as we discussed in more detail here. Entitlement programs and pension funds have been making highly unrealistic assumptions about future investment growth and valuations when calculating their unfunded liabilities. When more realistic market values are applied, under-funding explodes higher by several fold in most cases. So while that $441,000 isn’t all due tomorrow, the real value owed is likely several times higher.

This debt problem isn’t restricted to solely New York either. New York city was examined here because it is the most populous city in the US and thus the calculation will be relevant to the most people. There are likely other cities and states in worse shape. All Americans are in a roughly similar situation. In fact, nearly the entire developed world is in a similar situation.

The simple truth is that repaying these debts will be a monumental challenge for the various layers of government and for the US economy. To cut spending is self-evidently an impossible for today’s politicians, so it is unlikely that fiscal discipline will be implemented any time soon. This leaves raising taxes and yet more government debt as the very likely responses to this building crisis. Unfortunately, many of the most effected states and cities already have comparatively high tax rates. As Connecticut is already finding out, further tax increases are proving self-defeating as business and wealth leave the worst effected areas for more tax advantages locales. Resorting to more government borrowing in order to fund entitlement programs and debt repayment is no solution either. In fact, it is exactly the problem that we are discussing and which needs fixing.

Frankly, it’s hard to see any realistic resolution to this problem that doesn’t cause significant suffering down the road. That suffering may come in the form of punitive taxes, inflation, default, or cut backs to entitlement programs and retirement benefits that millions of Americans rely on. It will probably come in the form of all of the above. Looking forward, proportional accountability for the politicians and policy makers responsible for allowing debts and liabilities to spin out of control is imperative. To avoid further dysfunctional policies, policy makers’ careers and inordinately generous benefits must not be insulated, as they now are, from their own incompetence.