Submitted by Taps Coogan on the 4th of February 2016 to The Sounding Line.

As discussed in ‘The Fed – Missing the Curve’ (link here), the decision by the Federal Reserve (Fed) to keep the Fed funds rate between 0% and 0.25% for approximately 7 years following the 2008 financial crisis has left them in a weak position to productively influence the eventual end of the bull market. In both the ’01 and ’08 market crashes, the Fed cut rates by approximately 5% to support the economy and U.S. markets. With rates currently between 0.25% and 0.5%, the Fed would have to cut deeply into negative territory to accomplish the same 5% drop. It is no surprise that quite a bit of press is now circulating on the subject of negative interest rates.

Before assuming that negative rates are a viable plan, perhaps it is worth doing a thought experiment about what negative interest rates would actually mean for the U.S. economy.

In this post we will look specifically at bank reserves currently being held at the Fed and ask:

What effect might negative interest rates have on the amount of bank reserves held at the Fed and how might a change in these reserves effect the economy?

Before we speculate what the answer might be, a recap of recent history is warranted.

In the mist of the 2008 financial crisis, banks became dangerously under-capitalized. Unable to borrow reserves from each other, the banks turned to the Fed and borrowing from the discount window at the Fed surged, as can be seen in the chart below. The discount window is a way for banks to borrow reserves directly from the Fed during times of crisis to prevent a bank failure caused by a lack of liquidity.

The series of Quantitative Easing (QE) programs that were initiated during, and long after, the financial crisis were intended in part to rebuild the banks’ reserves. The Fed accomplished this by buying securities, like treasuries, from the banks. By doing so, the Fed re-liquefied the banks’ coffers to the tune of $3.5 trillion (link here). Freshly flush with QE cash, the banks had much less of a need to borrow reserves from each other and this risked driving the Fed funds rate even lower than the Fed wanted. So the Fed did something new, they instituted a policy of paying banks interest on bank reserves kept at the Fed, called the Interest on Required Reserves (IORR) and Interest on Excess Reserves. They decided to pay a rate equal to the upper limit of Fed funds target rate. The Fed wanted the Fed funds rate to be between 0% and 0.25% so the IORR and IOER was set at 0.25%. The effect of this policy is that banks had no incentive to loan out their excess reserves for less than 0.25% because they would be forfeiting the IOER on those reserves and thus lose money. This had important side effect that the Fed apparently also liked. It encouraged the banks to hold much greater amounts of reserves at the Fed. A great explanation can be found on the San Francisco Fed website (link here).

For comparison, also from the San Francisco Fed:

As shown in the chart below, excess reserves are currently sitting at around $2.34 trillion.

One might ask themselves, what is the point of keeping interest rates low and injecting banks with liquidity, ostensibly to increase lending by those same banks in order to stimulate the economy, if you are then going to pay the banks to not loan out that very same money? As the graph below shows, that would be a good question and a fertile topic for a later post, because bank lending has yet to recover to its historic ratio with deposits.

In fact, the gap between bank deposits and loaning has widened to about $2.28 trillion, or 65% of all the money the FED ever created in all its QE programs, which coincidentally is nearly equal to the $2.34 trillion in excess reserves being held at the Fed. These are reserves on which the banks are earning about $12 billion a year, thanks to the IOER, and taking zero risk while doing so. So what do we have: record levels of Fed provided bank reserves, being held at the Fed, having interest being paid to the banks by the Fed, all adding up to exactly zero economic stimulus.

Now what does that have to do with negative interest rates? As mentioned at the beginning of this article, the Fed has historically chosen to reduce the Fed funds rates by 5% to stimulate flagging economies.  With the Fed funds rate currently between 0.25% and 0.5% doing that would require creating a negative Fed funds rate. However, implementing a negative Fed funds rate may not be possible without eliminating the IOER.  After all, the very point of the IOER was to keep rates above zero. Eliminating the IOER would eliminate the primary reason banks are keeping $2.34 trillion in excess reserves at the Fed. Without the IOER, and even more so if the IOER were to go negative, the banks would finally move the $2.34 trillion in excess reserves out of the Fed and into the real economy.

Before assuming that this is a good thing remember that the QE programs spent $3.5 trillion dollars over 6 years of which it appears that only $1.16 ever made it into the U.S. economy.  A 0.25% or 0.5% decrease in the Fed funds rate could release $2.34 trillion in excess reserves into the real economy in a comparatively short period of time. The Fed was not planning to need to lower interest rates so soon and now they are in a position were even a small decrease in the interest rate could release far too much liquidity far quickly.

That is where two key uncertainties come into play.

All this taken together means that one should watch the IOER and excess reserve levels very closely. When there is a $2.34 trillion overhang of excess reserves it may not be possible to have ‘slightly’ negative interest rates and just a smidgen more inflation, as the Fed seems to be planning (link here). Just as a reminder, the entire private sector contribution to U.S Gross Domestic Product in 2014 was about $10 trillion so finding a new place to park $2.34 trillion will make waves.

What kind of waves? If it were to happen it may be just the thing to kill the strong dollar. 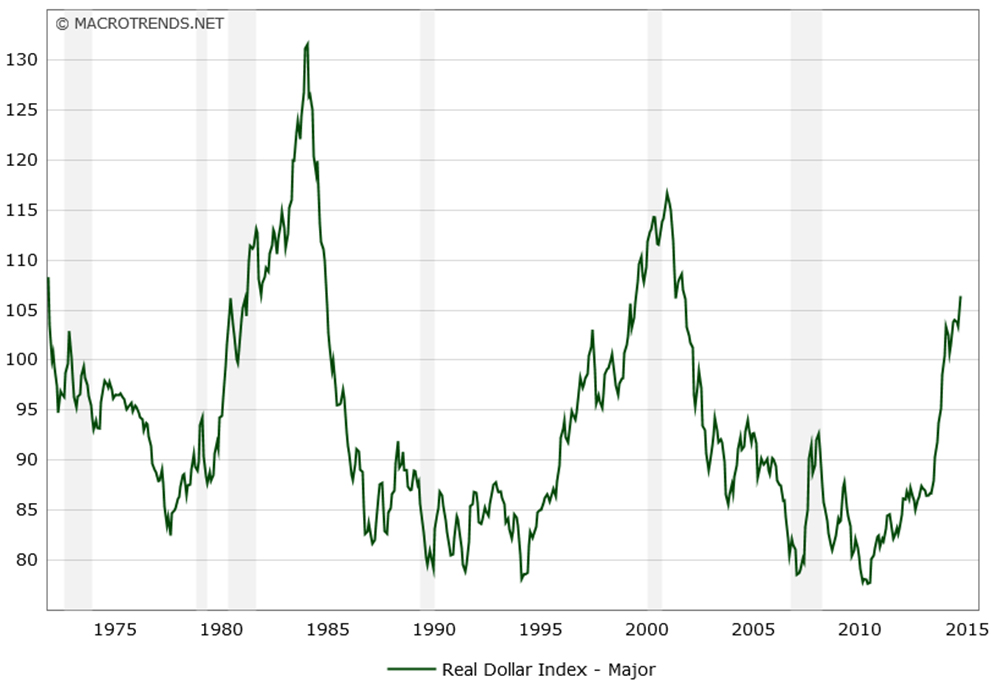 My goodness, Taps, hope your wings are not made of wax! So few understand this most remarkable of recent Fed phenomenons and fewer still recognize that the failure of banks to actually loan the publicly funded rescue $$$$ was significantly exacerbated by just this! And…THIS is where the much anticipated inflation bomb is quietly ticking. When these very same funds are forced to exit the Fed’s warm swaddling cloth of IORR, well, inflation? 8…7….6….5….4….3…..2…..1…..

[…] (link here) to ‘Negative Interest Rates – The Excess Reserve Overhang’ (link here). This interview is a perfect primer from an upcoming post that will look specifically at the […]

The Velocity of Money – A Cautionary Tale – The Sounding Line

[…] In other words, and as shown in the chart below, the timing of the explosion in excess reserves lines up perfectly with the implementation of the IORR policy. The Fed implemented a policy of paying Fed member banks interest on their reserves, and not surprisingly, the banks kept far more reserves than required. ‘Private hoarding’ simply has nothing to do with it. It was the Fed banks that hoarded money, at the Fed, to take advantage of IORR interest payments from the Fed, as discussed in depth here. […]