Submitted by Taps Coogan on the 19th of February 2018 to The Sounding Line.

Back in early 2017 we looked at every state’s level of pension underfunding, given realistic market values, relative to state tax revenues. Based on that metric, Illinois’ pension fund was in the second worst condition in the US; nearly 30% of the state’s revenues would need to be directed towards its pension to avoid a worsening of its already significant underfunding problem.

For those who wonder how Illinois’ pension system got into such trouble, the website Wirepoints recently shed some light on exactly that question:

“There’s little argument that Illinois politicians are to blame for the state’s massive pension crisis.

However, how politicians caused the crisis has long been misunderstood. Critics on both sides of the aisle typically accuse politicians – and by extension, taxpayers – of shortchanging pensions.

But a Wirepoints analysis reveals that too little money into pensions hasn’t been the issue. Instead, it’s the dramatic growth in total pension benefits promised by politicians that’s been bankrupting Illinois.

Wirepoints analyzed Illinois pension and economic data stretching back to 1987 and also compared pension plans across the country from 2003-2015, using data from the Illinois Department of Insurance and Pew Charitable Trusts…

Promised pension benefits in 2016 were 1,000 percent higher than they were three decades ago. As the below graphic shows, no other measure of Illinois’ economy comes even remotely close to matching the growth in promised benefits.” 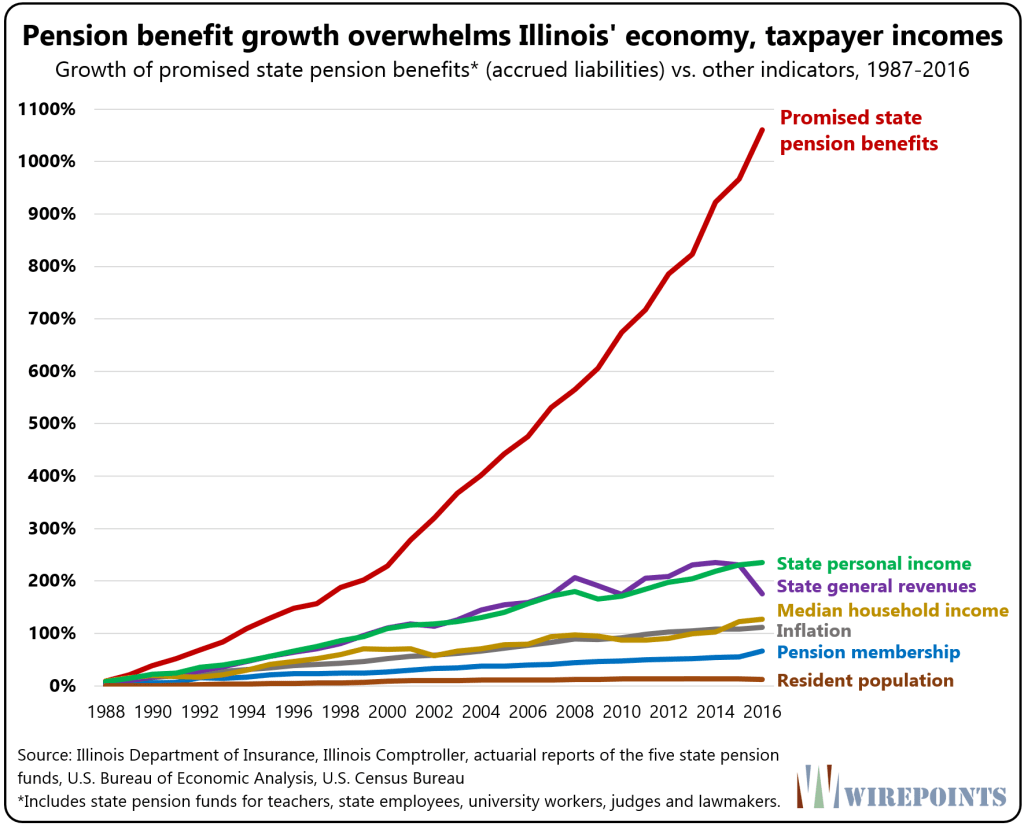 By any measure, the pension promises made by Illinois politicians have been extreme and unsustainable.”

Pension benefits have been the currency of state and local politics for decades with little thought given to the true costs being imposed on future taxpayers. As Illinois is now discovering, the future eventually becomes the present and promises need to be paid. As the chart above shows, all this is happening while Illinois state revenues are declining at the fastest pace since at least 1988.

More pensions and promises will be broken so get ready for more pain. This is especially true in the public sector where the 25 largest U.S. public pensions face about $2 trillion in unfunded liabilities. In recent years pension funds have not been able to generate the earnings and high returns that they had predicted because interest rates have fallen and growth has slowed so expect things to get worse. While it could be said that several ways exist to cheat or rob those who paid into pensions for years it would be an understatement, more ways exist than you… Read more »